January’s Game Club took us on a trip into the terrifying depths of the Zee in Sunless Sea.  Sunless Sea is a game of discovery, terror and death (namely yours), where you command a steam ship in the Victorian Gothic setting of Fallen London.  Sunless Sea inspired one of the best discussions at Game Club in quite a while, so there was a lot that we liked about it and a few minor things that we thought could have been better.

Sunless Sea consists of two parts, sailing your ship around Fallen London and visiting ports where the story portion of the game occurs.  It is a surprisingly text heavy game and fortunately this is where the game really shines.  We all agreed that the writing is probably the strongest part of the game, which may come as a surprise for a game about piloting a steam ship in the dark. But the further you get into the game, the more nuanced the writing becomes, and the more you realize just how much loving work the game creators put into crafting this world that the player is meant to discover.  The text, along with the still images that accompany it, does a great job of tantalizing your imagination to fill in the gaps of the story yourself. 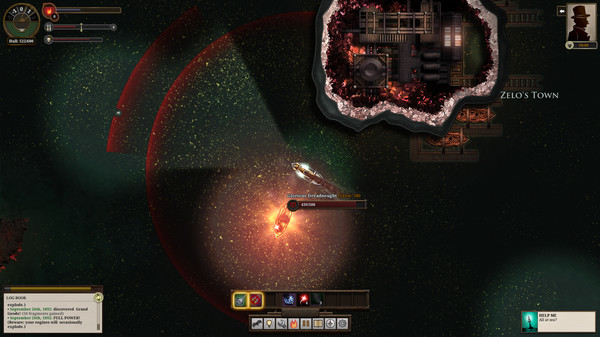 The flip side of this is that the text-heavy interface can be daunting to new players, as you have to read through quite a bit to even start your adventure.  The UI in ports/towns is very spartan and also text-heavy, requiring a lot of mouse clicks to perform simple actions or to get to a spot where you can turn in a quest. It was convoluted to the point where you can get lost in it sometimes, but not annoying enough to make any of us stop playing.  The game’s journal is also a bit confusing in its layout, but in a game about terror and confusion it seems to fit the theme.  The ship controls are set up similar to an MMO with an action bar along the bottom; we found using the mouse to be a bit too clunky when sailing and would recommend using the hotkeys for actions.  Some of the world artwork can make it a little tough to discern between a bridge you can safely sail under and an impassable barrier, but discovery and trial and error are part of the game so it is only a minor issue.

Sunless Sea is a rogue-like with permadeath and repeated playthroughs expected, so you end up re-reading a lot of the same text in the early part of the game. It can get repetitive but as you get better and progress further in the game, you will be rewarded with deeper story lines.  We wish there was a bit more persistence in the story between runs from Captain to Captain, but there is a enough new content to discover on each run that it was only a minor complaint.  The writing often has a dark sense of humor that fits the setting and keeps the player from descending into madness even as your captain and crew are going mad in the game. 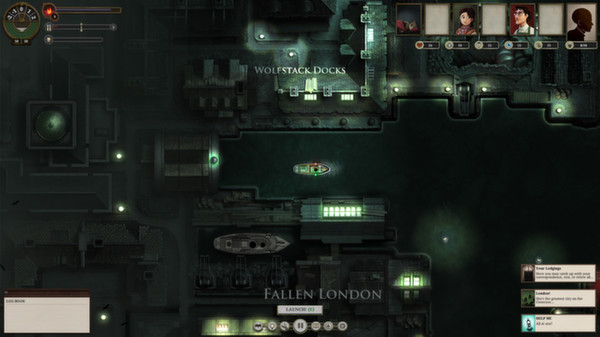 This brings up another interesting key aspect of the game, which is the terror mechanic.  Sailing through dark uncharted waters with minimal supplies and often under-powered weaponry can wear on a captain and crew. As the player comes across different scenarios, terror increases and strange nightmarish things start happening.  Terror can be reduced in many ways but keeping a keen eye on that meter and managing it will get you further in your adventures.  In regards to the terror mechanic, we did notice quite a few close calls in the game where you are racing back to a safe port and barely coast in with hardly any fuel left. We wondered if the game was cheating for the player a bit to add to the tension, but we didn’t mind much if it is since it adds to the fun of the game.

Sunless Sea is a very tough game and seems to have an almost vertical difficulty curve in that it is extremely punishing in the first part of the game, but once you push through that it levels out and you can really start making some progress. It just depends on how much you are willing to invest in that early part of the game to get over that wall.  We were concerned that so much of the great content in Sunless Sea is locked behind this huge difficulty wall that a lot of people might never see, but the game is good enough to keep most players going and escalates in a way that you will want to make that “one more run” to see what you can uncover on the next play-through.

We all agreed that we would keep playing Sunless Sea after Game Club since there was still a lot of game left to discover, and we would love to see a mobile version that would let us continue our adventures while away from our PCs.  The game is free this weekend (Jan 29th – Jan 31st, 2015) so go and check it out for yourself and find out if you can survive the dark depths of the Zee.  Next month we will be playing and discussing That Dragon, Cancer and moving the meetup to the Indies Workshop. Hope to see you there!