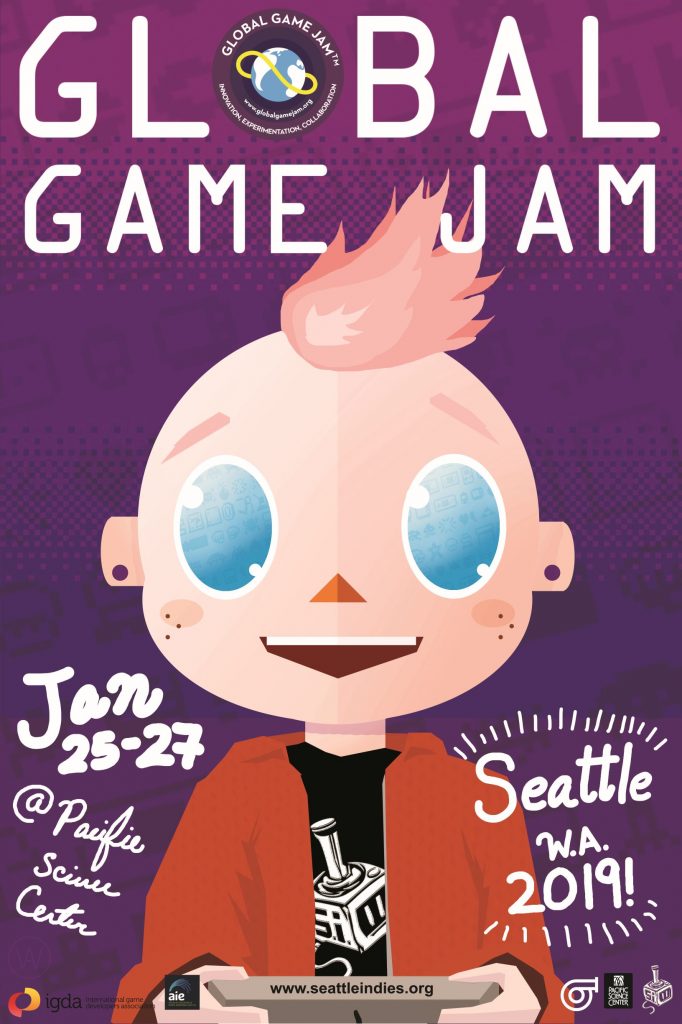 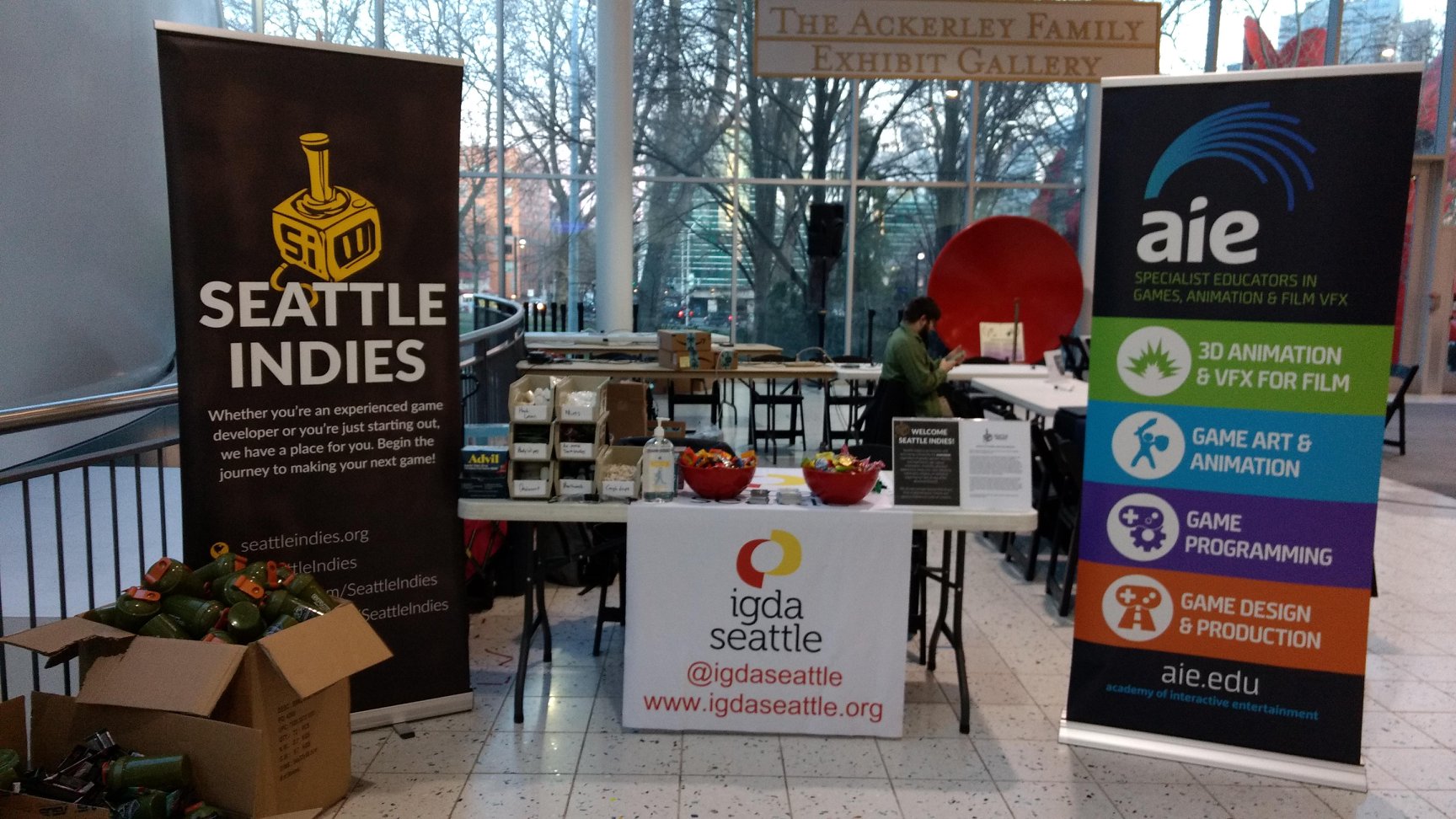 “Home is where you can be you.”

This quote, from game jammer Jacob Eliett, best describes the theme of the 2019 Global Game Jam: “What Home Means To You.” Seattle’s Global Game Jam took place at Pacific Science Center, in coordination with Seattle Indies, IGDA Seattle, and the Academy of Interactive Entertainment, from Friday, January 25th to Sunday, January 27th.

The Seattle site was one of 860 participating in Global Game Jam over the weekend which took place in 113 countries with 47,000 jammers who came together to make 9,000 games for the largest Global Game Jam in its 11-year history. This was the fourth year that Seattle Indies hosted a site and it was our largest turnout yet with over 170 jammers, consisting of professional and amateur video game developers alike, along with curious minds in various disciplines, created 38 games in teams close to a dozen jammers or working solo. During these two days, teams used the central theme of “what home means to you” along with diversifiers, to create games that ranged from puzzle games and exploratory games to non-digital games featuring edible goodies as game pieces.

The intention of a game jam or “hackathon” is to enable anyone interested in creating a videogame a 48-hour timeframe to try out the process. The only prerequisites are having a positive attitude, the willingness to try, and maybe a laptop that can run your game jam team’s software platform of choice. Game jam games are typically short. Some games might have a singular objective that can be completed within 30 seconds, others might be a fun game that you could play with friends, and others still could be artistic experiments. There are longer format game jams with the freedom to work more casually, but the Global Game Jam follows a traditional 48-hour weekend format. This might be the result of the 48-hour structure that most game jams use. (Although to note, there are game jams that have a more casual time frame.) One primary reason for this time frame, as explained by one returning game jammer, JT Johnson of the Out of the Ashes team: “48 hours forces you to get motivated to complete what you started. You might procrastinate otherwise.”

JT’s team also included two friends that were interested in the video game development process, but had never opened the Unreal Blueprint game creation tool prior to the Global Game Jam weekend. The idea of participating in a game jam might seem intimidating due to the timeframe or perceived requirements in technical aptitude. However, as JT continued: “It’s just like any group effort. You delegate out tasks that they can do, which can be tricky sometimes because you might think, “well, I can do that myself,” but then you remember that they’re there to help.” 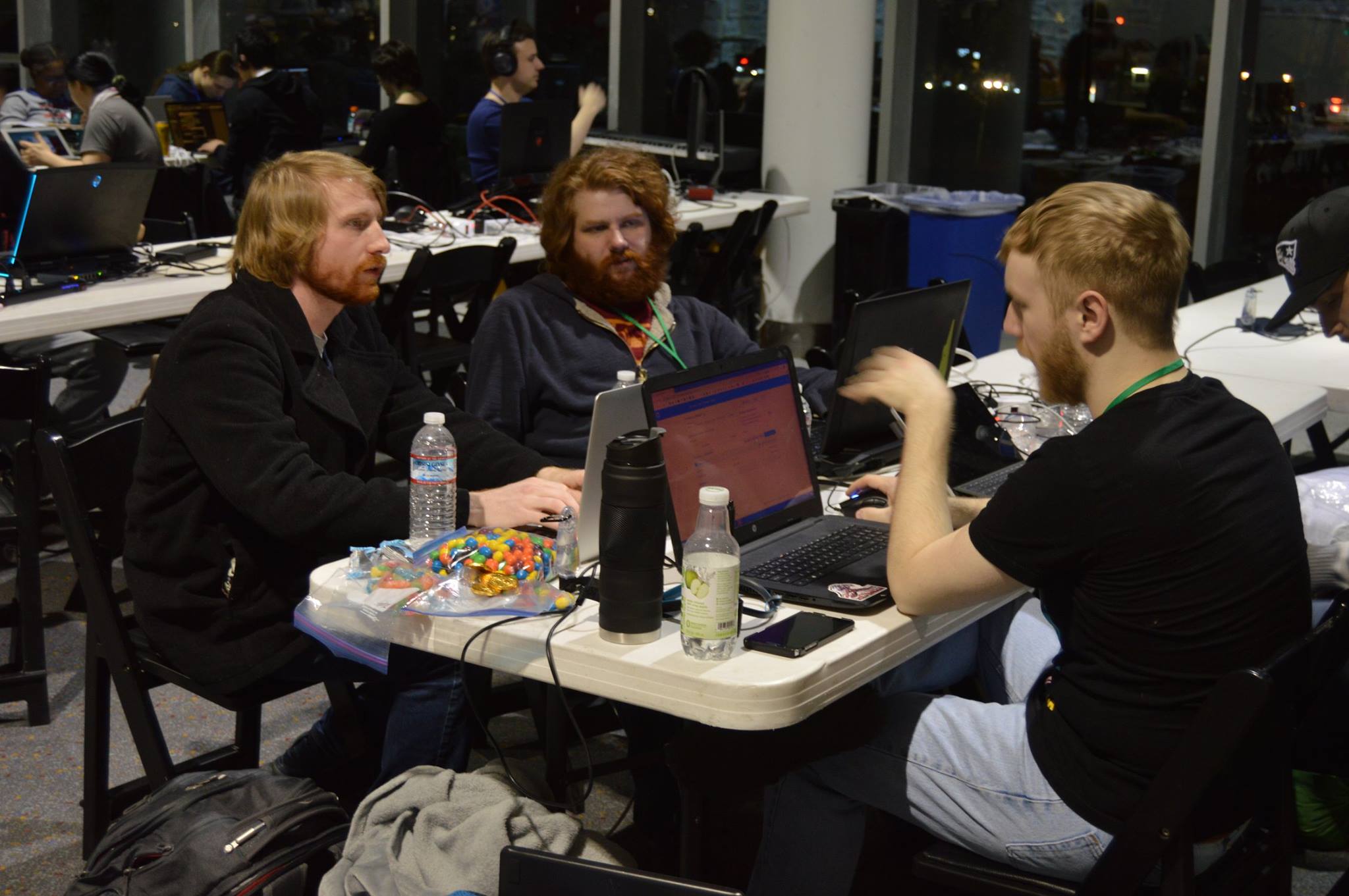 Photo by Chris Dougherty, showing the Out of the Ashes team in the collaboration process

When asked on the Global Game Jam Discord server prior to the event about the project scope, returning game jammer Henry Banks summarized the generally-accepted idea, based on what other jammers will tell first-time jammers: “Make something you can do in a day and spend lots of time polishing or at least fixing bugs when they come in. Keep your [game] really small.” Audio mentor fluffy added: “Keeping a game in scope mostly means focusing on a single gameplay mechanic and building levels around that mechanic. Also don’t get overly ambitious with people making assets.” As event organizer Tim Cullings concluded: “Basically focus on one mechanic and polish the heck out of it. At the end you’ll have 5-10 mins to present your work in front of everyone. If it takes more than that to explain you probably did too much.”

Team size is much more subjective. Some teams are more comfortable sharing tasks and working collaboratively within the same area, whereas other teams may prefer having a more structured format, with a point-person in charge of leading the team. Two good examples of larger teams from this year’s Global Game Jam: Finding Home had an 11-person team maintained by a dedicated project manager, Budi Mulyo, while else { return home; } had a 7-person team with structured team meetings like what you’d expect in a corporate environment with clearly-defined project objectives. Smaller teams usually had dedicated roles: The 3-person team behind Homing missile coming home had a dedicated code base programmer working on gameplay logic and another programmer handling specific larger tasks like UI. The team that created Nesting Season had dedicated roles: programming, art, sound effects, and music. The duo that created BEE BUDZ split-up duties between art and programming.

If there is one generally-agreed upon team dynamic, it’s that a team is more manageable when it is smaller. 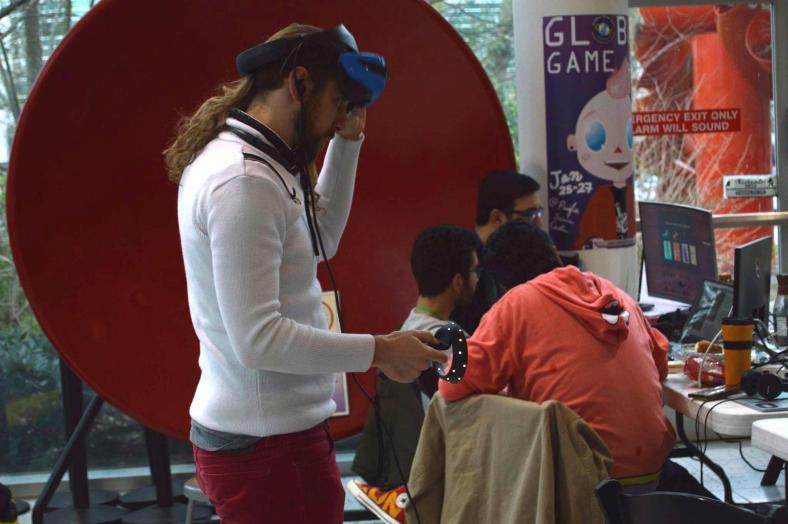 Within this sort of environment, however, the Global Game Jam organization makes clear that this is not a competition. “Global Game Jam encourages innovation, collaboration and creativity. We find competition often diminishes collaboration and sense of community at a jam.” Many jammers do use the opportunity to create the best possible games they can within the time constraint of 48 hours, however all teams are encouraged to be friendly with each other, and jammers can not only assist others, but can actively seek advice from other teams, along with the mentors available on-site or in the Global Game Jam Discord server. Everyone attends game jams because they want to help each other succeed.

This could be best summed up by an article the Global Game Jam website published, titled: “Looking after your mental health at GGJ,” which highlights the need for physical and mental self-care throughout the game jam. The natural inclination of many first-time jammers is to work through the entire two day period, and sustain themselves on only a limited amount of sleep, because there is so much work to do in such a limited amount of time. Returning jammers, having experienced this sort of “burn out,” are more knowledgeable on how to pace themselves.

When game jammers pace themselves well, these 48 hours can foster lasting friendships, through team collaboration, or even just networking by standing in line waiting for dinner. Game jams are popular because of this positive, inclusive environment, which was highlighted in rules presented during the presentation at the start of the game jam: “Always welcome Global Game Jam participants you don’t know.” “Be respectful of the space you are in and the tools you have.” “Ask for help.” “Be brave and speak up.” “Be respectful of different ideas and experiences.” “Use deodorant. Please.” 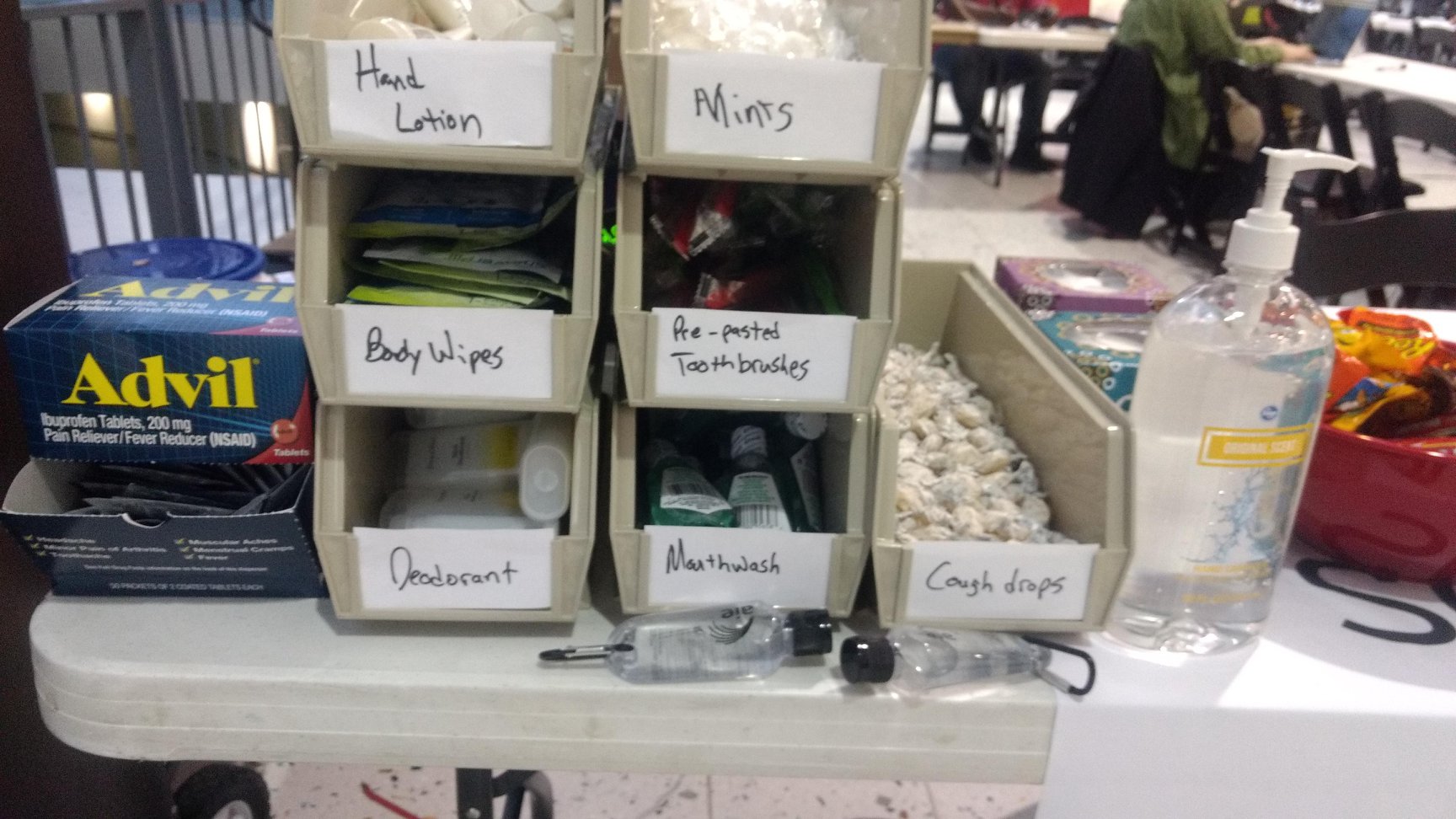 The staff at Pacific Science Center have been consistently great about providing quiet, safe spaces for game jammers to rest overnight or during the day. Their 24-hour security and on-site staff ensure that everyone can focus on having a safe and fun time. Everyone involved with production, including volunteers and coordinators, helped ensure that jammers stayed well-fed with bagel breakfasts and pizza dinners, and well-kept with personal care items like toothbrushes and deodorant. Those involved included partner organizers Seattle Indies and AIE, sponsors Turboplay, G Fuel, IGDA, and Pacific Science Center, along with supportive community members and volunteers.

The weekend started on the evening of Friday, January 25th, with coordinators from Pacific Science Center, AIE, and Seattle Indies conducting Opening Presentations. The presentations included video recordings from jammers all over the world to inspire jammers to think more broadly about the games they could create over the weekend including making games that are non-violent or co-operative. The presentations also enabled everyone to get together on the same page in regards to the resources and space provided to them over the weekend.

Midway through the weekend, at 5PM on Saturday, it was Seattle’s turn to showcase all the hard work being done at Pacific Science Center. Seattle Indies President Tim Cullings interviewed jammers in five-minute chunks about their work, as livestreamed on the Mixer platform for the world to see, and there were enough jammers excited to share their progress that the livestream lasted well over one hour! This was a great opportunity to let the rest of the world get a chance to see what was happening at the Seattle site.

The weekend concluded on Sunday evening with Final Presentations. Each team had five to seven minutes to present the fruits of their labor to the other jammers and friends and family in attendance with audience members casting ballots. The community favorite was Nesting Season, where a penguin mother builds her nest while defending it from other penguins, with colorful David Attenborough-style narration, and vivid watercolor artwork. The runner-up was PARTYENGINE, which had the crowd clapping in unison to the pumping beats.

Design/UI/UX mentor Heather Coles hand-crafted trophies to hand out for the winners of the following categories:

You can watch the full videos of all the presentations on our YouTube channel and check all the games online!

Photograph by Heather Coles, showing the trophies she made for the winners

To summarize the biggest value of game jams like Global Game Jam, when asked by Emily Rose: “What are you hoping to get of Global Game Jam?” AIE student Ray Soyama replied: “It’s like a free internship for two days.”

Seattle Indies is non-profit organization dedicated to fostering a vibrant and inclusive community of independent game developers in the greater Puget Sound area.  Our primary focus is on hosting events and activities that empower people to make games, share feedback, network, and showcase their projects. We also strive to provide friendly spaces where developers can congregate for support, discussion, and news on game development, in addition to highlighting the works of our talented creators to the general public.