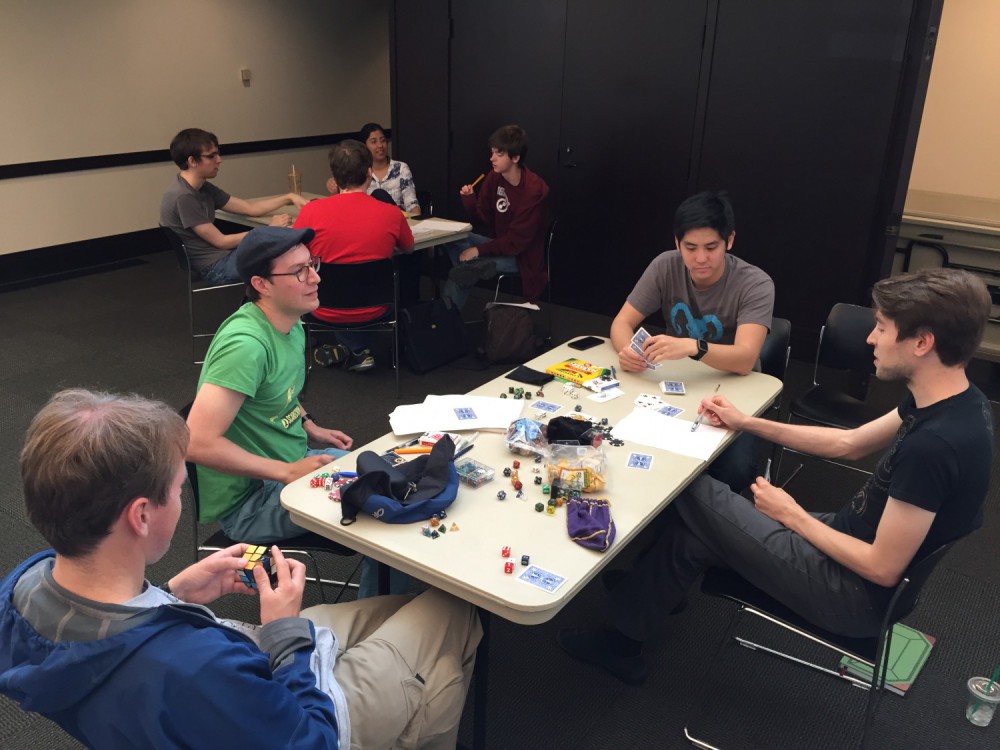 On Sunday we met for the monthly Game Design Workshop. Three teams set about creating a game from scratch over the course of three hours — no small feat! Here’s what we came up with:

The first team decided to make a platformer. They envisioned a puzzle platformer where the protagonist is magnetic. Throughout the level different forces would attract or repel the character depending on their polarity. On their team was an artist who helped put together a sketch for a sample level as well as concept art for a boss battle!

A Game of Chance

The next team wasn’t sure what they wanted to make. All they knew was that their game should involve bluffing. Imagine their disappointment, then, when their game “War Dice” wasn’t a bluffing game! Nevertheless they managed to create a neat, fast paced card and dice game which challenged players to outmaneuver their opponents. Each turn players could play one card from their hand and, optionally, an additional card for each die that rolled five or higher. Once cards were played, the player whose cards summed the highest won a point – first to three was the victor.

Game of Dice: A Song of Cards and D12s

Last but not least was a strategy game. Set in a distant galaxy, players commanded powerful armadas to conquer the region. More specifically, each player sought to control contiguous spaces on a board composed of dominoes using their ships (represented with dice). Each turn a player could move one of his ships or purchase a new one. Moving a ship into the same space as an enemy’s would kill the ship with the higher value. Buying a new ship meant rolling a die then placing the dice on a blank domino. At the end of each turn players earn resources based on where their ships reside.

Of course there were many other games which didn’t survive the process. As always it’s awesome seeing people’s creativity. Come join us next month to see for yourself!